Infrastructure as a Code – A Critical DevOps Skill 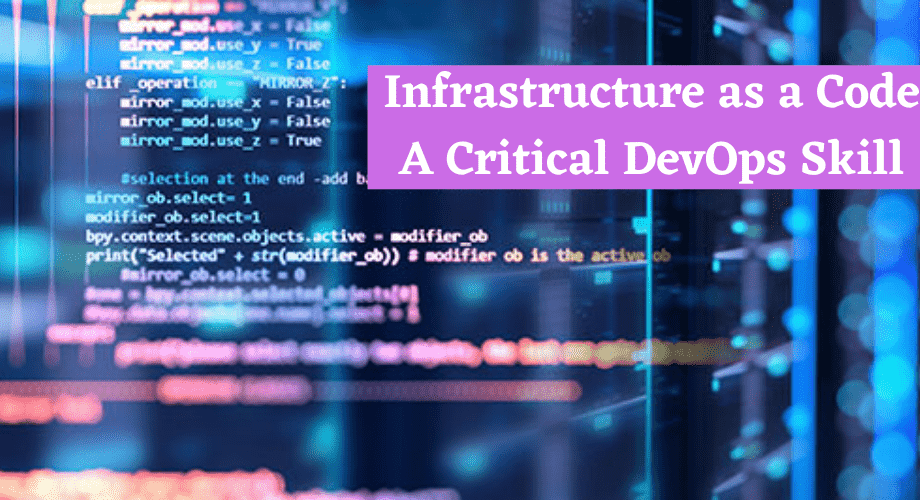 Managing the IT infrastructure has always been a challenge for companies to surmount. Earlier a lot of time was devoted to physically configure, manage and maintain the software and hardware needed to run the business. With the access to and large-scale adoption of the Cloud, the nature of challenges have changed. Today, the question of scalability is of prime importance. The adaptability and agility of businesses depend on how proactively companies are able to manage their IT infrastructure.

One of the significant new trends in Cloud Computing is Infrastructure-as-a-Code, also known as IaC in short. While the concept isn’t new, the adoption of key technologies facilitating the collaboration between Development teams and Infrastructure teams have made it one of key aspects of DevOps. At the end of the day, it is always about reducing time-to-market, though the approaches could be different. The need to scale can lead to issues within teams such as lack of visibility. Automation tools coupled with DevOps can can bring the teams on the same page. This is where IaC comes in.

This article will discuss various aspects of IaC, including the skills landscape, and a broad overview of salary trends with the skill at the centre.

Infrastructure-as-a-Code (Iac) manages and provides Infrastructure through code instead of manual processes. IaC uses high-level descriptive coding language to automate the provisioning of IT infrastructure. The automation will eliminate manual tasks for developers like provisioning and managing servers, operating systems, database connections, storage, and other infrastructure elements every time they develop, test, or deploy a software application.

In today’s competitive environment, companies are deploying hundreds of applications into production, which directly impacts the Infrastructure as it is scaled up and down in response to the developer and user demands. Thus, it has become necessary for businesses to automate (which can be done through IaC)  to cut down on cost, reduce risk and increase the speed of deployment.

The original concept of the IaC framework has given rise to DevOps. IaC enables DevOps professionals to create and version Infrastructure in a similar fashion rapidly; they version source code and track these versions to avoid inconsistency among IT environments that can lead to severe issues during implementation.

“The purpose of Infrastructur- as-a-code is to enable developers or operations teams to automatically manage, monitor, and provision resources, rather than manually configure discrete hardware devices and operating systems. Thus, Infrastructure-as-a-code is sometimes referred to as programmable or software-defined Infrastructure (SDI)”.

How does IaC help?

Due to the COVID-19 pandemic and subsequent remote work introduced worldwide, Cloud Computing witnessed rapid expansion and adoption across customer segments and industries. One of the most significant advantages of Cloud Computing for business is on-demand scalability without the need to set up physical Infrastructure and incurring the associated high cost. But cloud infrastructure still needs proper configuration, and this is where Infrastructure as Code comes into the picture.

IaC involves creating cloud environments with codes or what is also known as Templates. By opting for this method, IT teams can develop an entire infrastructure to run their applications without making any physical configurations as they were used to in the past.

Businesses that use large cloud-based applications can benefit from IaC as it is an easy, fast, more effective, and more consistent way to create new infrastructures. Before the Cloud, setting up physical infrastructures could take anywhere between weeks or even months. For example, buying a server, installing the server, and the hack and installing operating systems in applications were time-consuming tasks.

With the introduction of Cloud C, applications can be run in seconds. With IaC, the IT teams can now run everything on a cloud template (a type of programming that can be updated and shared with the team). As a result, IT teams benefit from IaC as it provides agility, greater control, and consistency across different Cloud platforms – AWS, Microsoft Azure, or Google Cloud.

IaC makes the company’s Infrastructure highly elastic, which makes it repeatable and scalable.  A single professional can deploy and manage many machines at any given time to reduce the cost, fewer resources (no need to hire hundreds of employees to work on different devices), and overall reduces the risk of operating the systems.

Infrastructure as code allows virtual machines to be managed programmatically, eliminating the need for manual configuration and updates to individual pieces of hardware.

Infrastructure-as-a-Code has many benefits, but it does with some drawbacks for the businesses. Certain challenges need to be addressed before the implementation process begins.

Infrastructure-as-a-Code requires DevOps models to run the codes. DevOps is one of the most sought-after skills in the IT market, and there is a shortage of professionals with the requisite skills. As every company is moving towards the Cloud, DevOps and Automation skills will be in demand in the near future to smoothly run cloud operations. Or in other words, IaC is a DevOps practice that can help automate the needs of developers across the software life-cycle process. There are multiple open-source tools available on the market – Ansible (Red Hat) and Terraform are the most commonly used examples. There is little doubt, therefore that these two form a basic requirement for the majority of job specs. Ansible for example, helps in automating provisioning of Docker containers and Kubernetes. Terraform, on the other hand works with majority of the Cloud environments helping in automation. There are other tools in the market such as Chef and Puppet.

IaC brings a lot of power for the developers. Therefore, companies need to hire and train experts in coding languages such as  JSON, HashiCorp Configuration Languages (HCL), YAML, Ruby, etc. However, there is a severe shortage of developers in the market, and a lack of skilled professionals will hamper the cloud implementation and delay running the apps.

From the salary perspective, developers are one of the highest-paid in the IT job market. According to Itjobswatch, Core Developer earns a median salary of £95,000. In addition, there are more than 4,000 open java developers advertised on LinkedIn, which implies there is a massive demand for java roles across the country.

One of the biggest challenges for companies while adopting DevOps automation (read IaC) is accurately integrating new frameworks with existing Infrastructure. In addition, IaC is relatively new, and transforming complex and interconnected resources and their dependencies into coding isn’t going to be straightforward for the teams.

Shifting to and adopting IaC takes much time, requires planning and collaboration with security and compliance teams. One of the pain points for the companies will be the gaps that exist along the IaC adoption journey that creates confusion as to how and where your resources are provisioned, governed, and secured.

When it comes to Developers, they may be following best practices. But when an urgent situation arises, it may force the operations team to make a configuration change directly in the production environment. It will be against the cloud infrastructure based on the principle that infrastructure should never be modified after it has been deployed.

In case of an urgency, anything that needs to be updated, fixed, or altered in any way, new infrastructure has to be provisioned through a code. But, more importantly, the configuration change may introduce risk, resulting in the cloud’s posture drifting from the specific posture defined through IaC before the infrastructure was provisioned.

Tech professionals implementing Infrastructure-as-a-Code are most likely working as DevOps and Automation professionals in the Cloud Computing environment – Infrastructure, Machine Learning, Cloud Engineer, and even AWS or Azure Consultant. This article provides details on the salary trends and skill requirements for a professional working in different Cloud roles in the United Kingdom.

Below is the list of the top 10 co-occurring skills mentioned in various cloud computing jobs that required some knowledge in IaC. Or in other words, the numbers denote the % of Cloud jobs that require each of these skills. It is clear that over 76% of the Cloud jobs require DevOps experience and skills. Terraform is the most popular tool as far as IaC is concerned – 70% of the Cloud jobs mention Terraform as a requirement. Another popular tool, Ansible scores at ~30%. 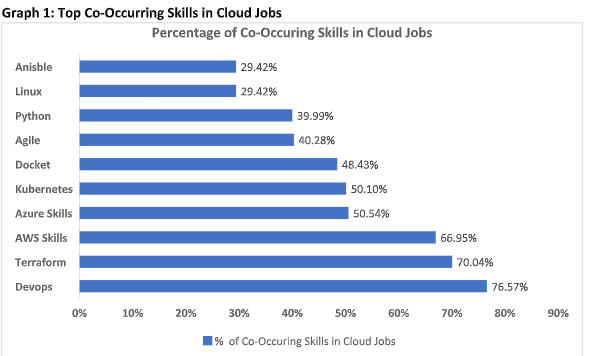 In Graph 1, it is illustrated that out of four Cloud jobs, 3 jobs (76.57%) require experience in DevOps. Across the world, there is a demand for DevOps professionals. Any company that is implementing cloud services for their work requires DevOps experts. DevOps is an approach or practice that combines the efforts of the Development & Operations teams to collaborate throughout the entire software development cycle which enables them to be on the same page. DevOps helps in shortening the SDLC and ensures delivery of high-quality software.

According to Microsoft, Infrastructure-as-a-Code enables DevOps teams to test applications in production-like environments early in the development cycle. These teams expect to provision multiple test environments reliably and on-demand. Infrastructure represented as code can also be validated and tested to prevent common deployment issues.

One of the most significant benefits of DevOps is that it automates processes, organizes workflow, and regularly checks the performance. With the implementation of Cloud being on the rise, it is has resulted in enormous demand for DevOps professionals in the UK and across the world.

According to CodinGame Developer Survey 2021 (based on responses from 15,000 international developers and HR professionals), DevOps is the most sought-after skill set in the IT job market. Most Talent Acquisition professionals cite difficulties in filling DevOps, Back-end Developers, and Full-stack Developer positions.  About four out of ten TA professionals (43%) feel that they will struggle to hire DevOps professionals.

Companies in the UK are going to struggle with DevOps talent over the next 12 months unless they embrace remote work or adopt the evolving Hybrid work model. CodinGame analyzed 13,000 tech jobs across more than 100 UK towns and cities, excluding areas with less than 50 available developer job listings. Just 23% of full-time listings offered remote work, rising to 36% when roles listed as “temporarily remote” were included.

On any given day, LinkedIn has more than 10,000 unfilled positions for DevOps-related jobs. The demand for DevOps is spreading rapidly across roles, organizations, and industries. In the UK, companies are already struggling with overall Digital skill shortages, and the situation has worsened with Brexit and COVID-19 as companies are not able to recruit overseas employees.

The following is a list of Top 10 co-occurring IT skills for DevOps roles in the United Kingdom in 2021. 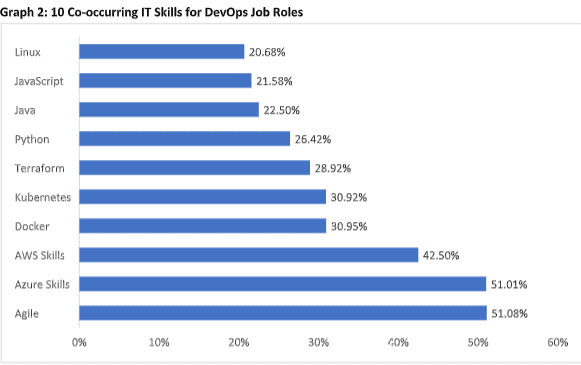 In the post-COVID-19 world, companies will continue to embrace Cloud Computing, and Hybrid work culture is on the rise. As a result, demand for cloud computing is set to increase further. Organizations looking to adopt DevOps best practices coupled with infrastructure automation would need hands-on people with skills.

In the near future, IaC has the potential to replace traditional manual provisioning of infrastructure through admin consoles/GUI with a programming-based approach. However, one of the biggest challenges faced by the companies is finding the right skill-set, such as DevOps professionals. DevOps professionals have the required skill set to manage IaC without configuring physical IT infrastructure or virtual servers on-prem or in dedicated Data Centers.